This is a university project with libraries and applications that work with Brotli compression.

A cursory glance at the thesis is recommended before looking into this project. Classes in BrotliLib, which represent the object structure, as well as the labeled bit stream in BrotliBuilder, can greatly help understand the specification and the principles behind how Brotli and its decompression process works.

If you are only interested in learning about Brotli and algorithms used in the official compressor, a simplified version of the thesis is also available.

The application lets you open a compressed file or use one of the example implementations of encoders and transformers from BrotliImpl.

In addition, it also contains tools such as the Static Dictionary dialog, which lets you navigate and search the entire contents of Brotli's embedded dictionary. 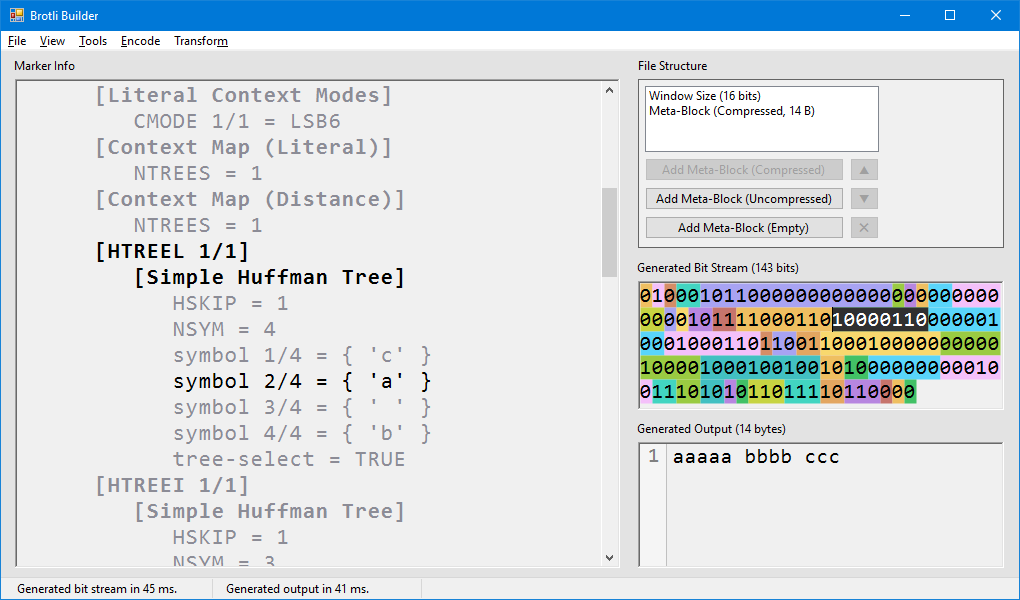 The bit stream field has color-coded groups. The currently selected group has a black background with white text.

Each group corresponds to a marker that summarizes its meaning. The selected group's marker is centered and highlighted in the left panel as you navigate inside the text field. Wherever possible, markers use names defined in the Brotli format specification to make them easily searchable.

Opening a compressed file splits the bottom right panel (bit stream and output fields) into two sections labeled Original and Generated. The Original section has the opened file, the Generated section has the result of reserializing the generated object structure. Transformations are always applied to the Generated section. Note that as there's only one Marker Info panel, it will show markers that belong to the section of the most recently highlighted group.

The Tools menu lets you clone the contents of Generated section into the Original section and vice versa, and also compare the complete marker text between the two sections (with WinMerge detection to instantly show a diff).

All text fields in the main window support common shortcuts for navigation and selection. Additional shortcuts include:

The key principle behind the project is representing the individual components of a compressed file as an object structure, which is easy to analyze and manipulate.

As Brotli is a bit-oriented format, a BitStream provides a generic bit collection used across the whole main library. A BrotliFileStructure is the root of the object structure of a compressed file, containing:

The main library defines and provides means to the following operations:

All of these operations are also available as streaming APIs, for when the entire structure does not need to be loaded into memory at once:

A transformer should focus on how to modify parts of the MetaBlock header, which changes the representation of insert&copy commands in the bit stream. Transformers may also take one MetaBlock and split it into multiple smaller ones. Transformers should not, however, modify a MetaBlock in a way that changes the uncompressed output.

While this doesn't exactly mimic the way official compressor works, the separated Encode - (Transform)* - Serialize pipeline with BrotliFileStructure as the centerpiece lets you think about MetaBlock construction in small, focused steps.

It also allows opening a file created by the official compressor, and apply transformations to it to find a more compact representation of it. Please keep in mind that there is more work to be done in terms of consistency, please read the next section.

In addition, performing any transformation inherently regenerates parts of the MetaBlock header.

The project is written primarily in C# and built using Visual Studio 2019. Make sure you have the following components:

BrotliCalc requires a brotli executable to enable the batch compression command. This repository includes a Windows build based on the c435f06 commit in the BrotliCalc/Resources/ folder. You can supply your own build either by replacing the file and rebuilding BrotliCalc, or by using the -brotliexe command line argument.

Publishing profiles are included for BrotliBuilder and BrotliCalc. The libraries can simply be built in Release configuration to generate the files.